This famous movie line sums up the choice I had before me when I realized I was going to need surgery.

It all started back in February when my husband and I made a snap decision to go see the Lake Superior ice caves on our way home from a cross country ski and snowshoe trip to the Porcupine Mountains (okay, really big hills) in northern Michigan. We’d spent three days in a fairyland of sparkling powder, skiing through Christmas-card scenes up and down the mountains. The caves were only an hour and a half away, and we could just make it by sunset.

We walked a mile along the frozen shore in the subzero winds as the sinking sun colored the ice from gold to rose to violet. In the first cave we reached, we stood in wonder, grinning and gaping at the fantastical forms above and around us. I took a step deeper into the cave, and I slipped. “Ow, ow, ow, ow, ow!” I yelped, cradling my left arm. “Something’s really wrong.”

The walk back felt infinitely longer than the walk out. My arm was held tight to my body with a sling made out of a long scarf. I retreated into my breath and focused on taking each step until we got to the car. My RN husband made an ice pack, I popped the only two ibuprofen in the car, and we headed to the ER in Ashland. We left knowing I had a distal radial fracture – in other words, I broke my wrist.

After a week in an exceedingly uncomfortable splint, I got the first of three casts, then came a brace and the start of physical therapy. I worked hard to regain my flexibility and strength, shortening my physical therapy time by weeks according to my PT, which was music to my ears.

A mere five days from being released back into my normal life on the cusp of summer (biking! yoga! paddling!), it happened. 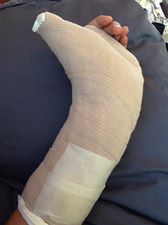 I felt a shock of pain while puttering in the garden, and after an hour of elevating and icing, I gingerly examined my arm and hand to assess the damage. As soon as I realized I couldn’t lift my thumb, a dizzying numb feeling descended into my chest, and I began to weep. I knew it meant surgery and starting the nearly complete cycle of splint-cast-brace-physical therapy all over again.

I broke the news to my husband the next morning and wept for four more hours. “Recalculating…” Like the GPS voice says while figuring out how to correct a route gone awry, I was lost in rerouting my work responsibilities, summer plans, and my freedom.

So that was the decision point: “We can do this the easy way or the hard way…” I could weep and moan and bitch about how unfair this was, or I could have some equanimity about it. Don’t get me wrong! Crying is immensely beneficial and repressing feelings is not. I needed that good, long cry. However, I decided I wasn’t going to cry about it the whole darn time.

It began with the decision to be grateful, and man, do I have a lot to be grateful for: health insurance thanks to my husband’s job, access to world class facilities, a surgeon who is good enough to work on the UW-Madison Badgers, a working right hand, a reparable injury, and much more. It began with remembering lessons learned from Julie, my friend who died at age 48 of lung cancer in just three shocking months, leaving me with the certainty that whatever crap or pain I may be going through, she’d give anything to be alive and feeling what I’m feeling. A ruptured tendon? So what – it’s not cancer. 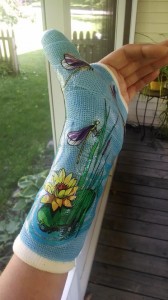 It turns out that the ELP tendon, the one that lifts your thumb, spontaneously ruptures during healing in 3% of distal radial fracture cases like mine. Several weeks have passed, and I’ve had a successful corrective surgery and lived through a week of being in a plaster and Ace bandage monstrosity of a cast that I referred to as The Hulk. I’m now sporting a pretty blue cast that I’ve decorated with water lilies, dragonflies and cattails. I’m also incredibly proficient at doing things one-handed, from undoing my bra behind my back to spreading cream cheese on a bagel (turns out elbows are quite useful).

It’s hard to write about this without sounding preachy or Pollyanna-ish. I’m just trying to express a lesson that it’s taken a long time to take to heart, and many hours of sitting meditation and living mindfully to begin to grasp, that we do indeed have choices about how we respond to adversity. We choose the story line we live. We choose the color of our days.

This time, I was able to choose the easy way over the hard way. The way of accepting reality as it is and not bemoaning how I wish it was. The way of living with a hard reality from of a place of gratitude and optimism.

Check in with me down the road. I hope I can say the same the next time.

Want to join the discussion?
Feel free to contribute!

Am I Just Lazy? The Real Reason We Resist ChangeWho Do You Think You Are? Scroll to top